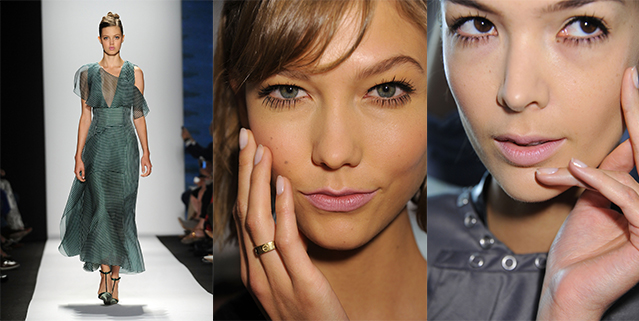 Fashion went to the dogs at Jen Kao where Afghan pooches inspired the long flowing hair, while earthy matte skin-tone manicures and pedicures accented the ode to the American West in boxy frayed plaids and denims. Colors used were Morgan Taylor in In the Nude topped with Mattes A Wrap.

At Malan Breton, manicures inspired by sapphires set in platinum were created using Morgan Taylor in Rhythm and Blues, a glittering blue hue and silhouetted in Chain Reaction, a silver metallic on elegant almond-shaped nails.

Zac Posen's ultra-romantic, rococo ruffled gowns and voluminous floral prints in dusty pastels inspired a faded 'rose garden manicure' using Morgan Taylor in Coming Up Roses at the base, an earthy pink, and fading at the tip to Polished Up, a cool pastel. 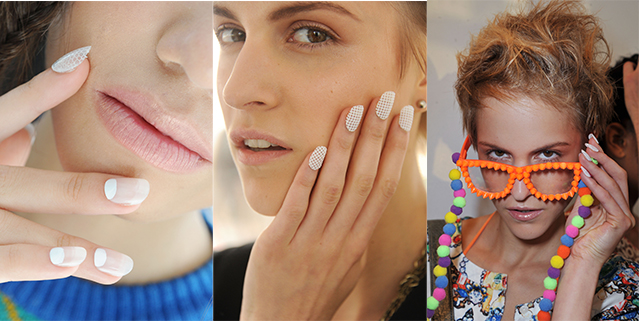 Patterns and lace played a key role at Diego Binetti by romanticizing the manicures. Three white nail looks were designed by Danielle Candido with the DIY nail art fan in mind.
1. Exaggerated moon manis using All White Now as the moon and In the Nude as the base accented other nails polished in In The Nude.
2. A crisp white cross-hatch mesh look gave the illusion of texture under gleaming top coat Make It Last.
3. Lace Moon Manicures added drama to fingertips with white lace from moon to tip and In The Nude at the moon. 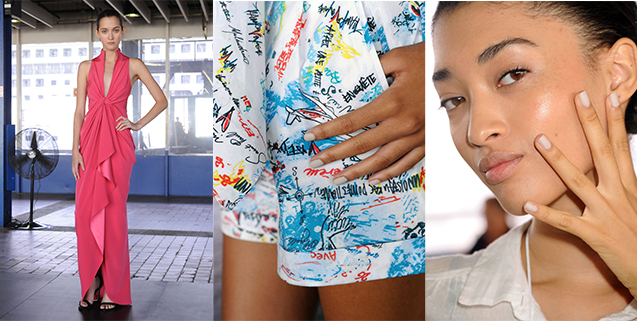 A natural matte nail with Morgan Taylor in Birthday Suit was created for Catherine Malandrino.

Sexy black and white collection with graphic cutouts based on optical effects was completed by a severe matte fleshtone mani trimmed with a sleek black edge. The colors used were a custom-blended foundation and Little Black Dress tips under Mattes A Wrap.